Adriatic Sea hides many hidden treasures and these mystical creatures are just some of them.
Which one of them can be spotted on our scuba diving trip?
Join us and check for yourself! 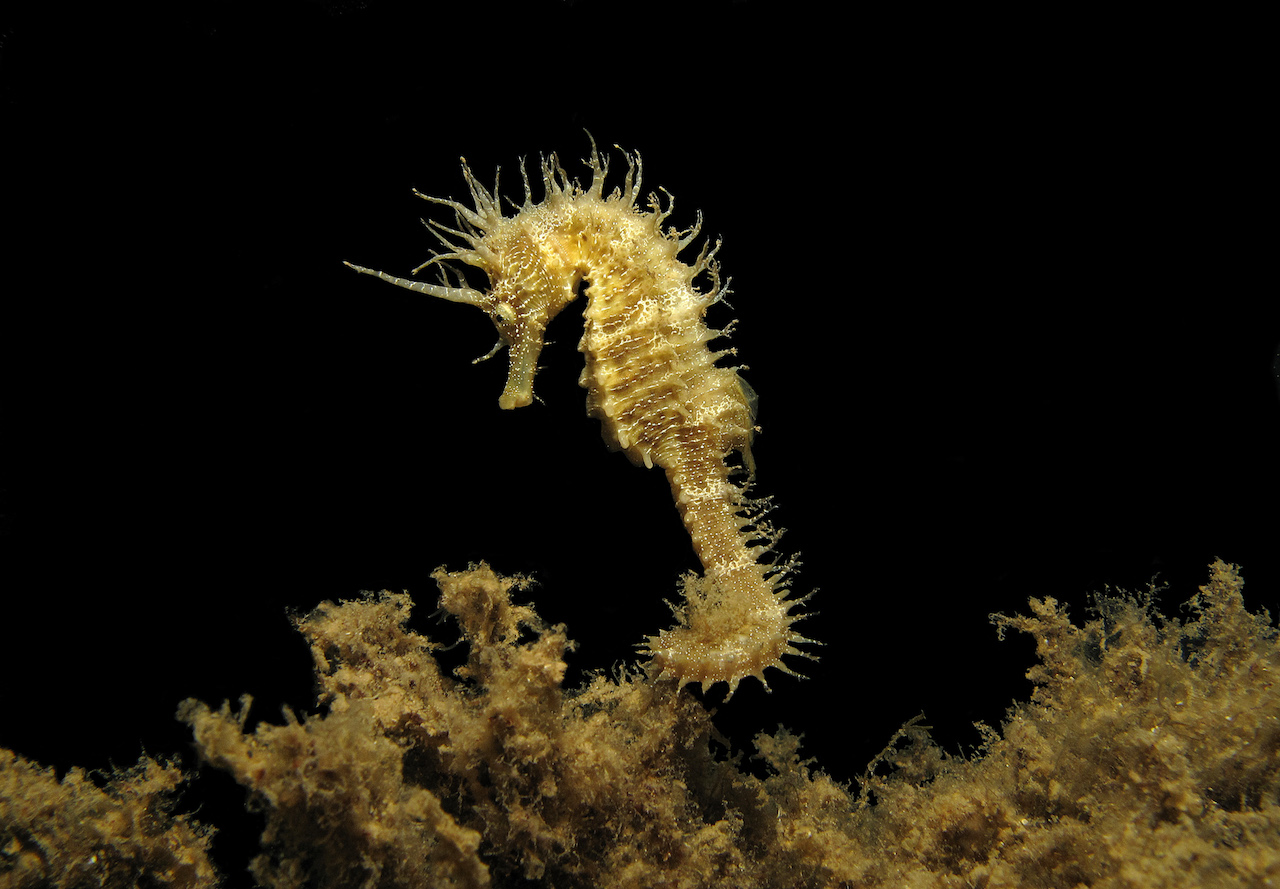 Seahorses (Hippocampus) are the marine inhabitants with unusual shape they look like a chess piece. These are the fish from the superclass of bony fish (Osteichthyes), family Syngnathidae. They swim upright and can escape their predators imitating color of underwater plants. Seahorses are lovely inhabitants of warm seas. There are 54 species of seahorses. Two of seahorse species are present in Adratic sea:
Long-snouted seahorse (Hippocampus ramulosus) i Short-snouted seahorse (Hippocampus hippocampus, both strickly protected speces. The seahorse usually stay on the seabed covered with seagrasses (Posidonia oceanica, Cymodocea nodosa, Zoostera marina i T. noltii) in warm, shallow waters, near the sea currents, where they are provided a sufficient quantity of their main food (plankton). Sea currents would not take them away because of their long tail wrapped around the nearest plant. Mating season coincides with the full moon. After a long and noisy courtship female postpone the female eggs into the male abdominal pouch. Then is the male responsible for maintaining spawning. Male seahorse is only male in the animal kingdom to give birth to its young. Incubation of eggs: usually 14-28 days, depending on water temperature Number of offspring: 50, depending on the type. 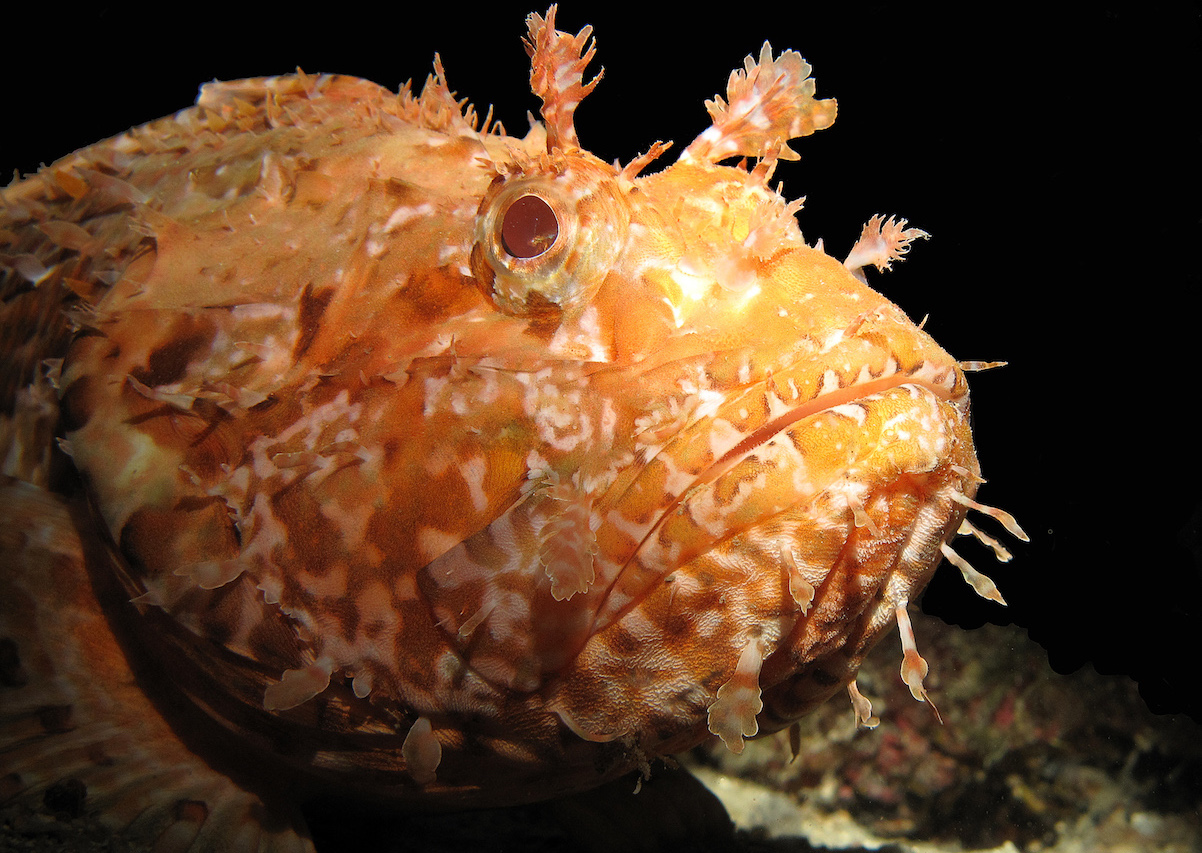 Red scorpionfish (Scorpaena scrofa) This species is found in the Mediterranean Sea, the Eastern Atlantic Ocean around the British Isles, where rare, south to Senegal, the Canary Islands, and Cape Verde. Scorpaena scrofa is demersal and lives in marine, and brackish environments with rocky, sandy or muddy bottoms at depths of 20–500 m (66–1,640 ft). By day, it lives in burrows and caves, at night it comes out to hunt. This species is a sedentary, solitary and non-migratory fish. It is predatory, feeding on other fish, as well as crustaceans and molluscs. 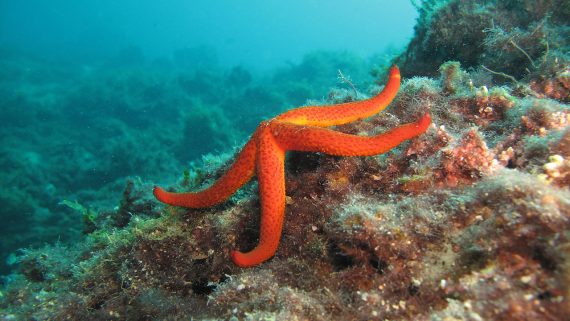 Echinaster sepositus, the Mediterranean red sea star (sometimes only red sea star, but this name is also used for other species) is a species of starfish from the East Atlantic, including the Mediterranean Sea.
E. sepositus has five relatively slender arms around a small central disc. It usually has a diameter of up to 20 cm (8 in), but can exceptionally reach up to 30 cm (12 in).
It is a bright orange-red in colour, and has a soapy surface texture unlike superficially similar Henricia starfish (another somewhat similar species from the same region is Ophidiaster ophidianus). The surface is dotted with evenly spaced pits from which the animal can extend its deep red gills (papullae).
It is found at depths of 1 to 250 m (3–820 ft) in a wide range of habitats, including rocky, sandy and muddy bottoms, and sea grass meadows (Posidonia oceanica and Zostera). 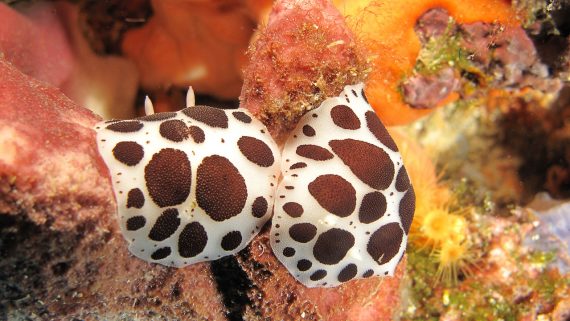 Peltodoris atromaculata is a species of sea-slug, a dorid nudibranch, a marine gastropod mollusc in the family Discodorididae, superfamily Doridoidea, class Gastropoda and phylum Mollusca. It is known by different names in different languages such as the Dotted Sea-Slug, Snail Cow (English), Vacchetta di Mare, Lumaca Maculata (Italian), Doris Maculée, Doris Léopard, Doris Dalmatien (French), Vaquita Suiza (Spanish), Leopardenschnecke, Leoparden-Sternschnecke, Kuhschnecke, Gefleckter Doris (German) & Luipaardslak (Dutch). Peltodoris atromaculata is especially found in dark and shady underwater areas, in caves, on the walls or ceiling, and can be found at any depth. The Dotted Sea-Slug has an oval body and is easily recognised thanks to its dark brown spots on a white background. The average size is from 5 to 7 cm that can go up to 12 cm. Peltodoris atromaculata has feather-like gills on the rear part of the body. It has eight appendages on three branches and is used by the nudibranch to breathe. It also has two rhinophores on the front part of the body. These rhinophores are olfactory organs comprising twenty-five lamellae, which increase the surface for receipt of molecules carried in water. The rhinophores and the gills are white and they are all retracted at the slightest alarm. When the danger has passed, the rhinophores and the gills slowly emerge. The Dotted Sea-Slug has long been considered a species endemic to the Mediterranean Sea, however it has also been observed on the Basque Coast & the Canary Islands in the nearby Atlantic Ocean. 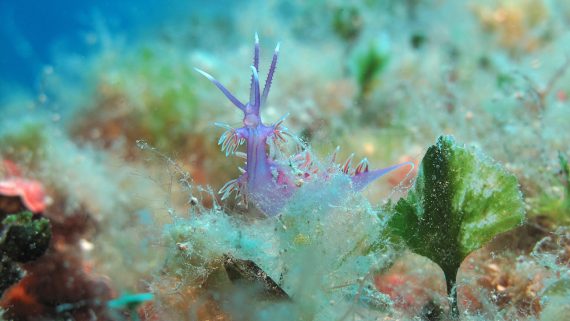 Flabellina affinis is a species of sea slug, an aeolid nudibranch, a marine gastropod mollusk in the family Flabellinidae. It is the type species of the genus Flabellina. This species is found in depths to 50 m in European waters in the Atlantic Ocean from Portugal to Ghana and the Canaries and is widespread in the Mediterranean Sea. The species can grow to a length of 50 mm. It feeds primarily on species of Eudendrium, a very common hydroid genus in the Mediterranean Sea. 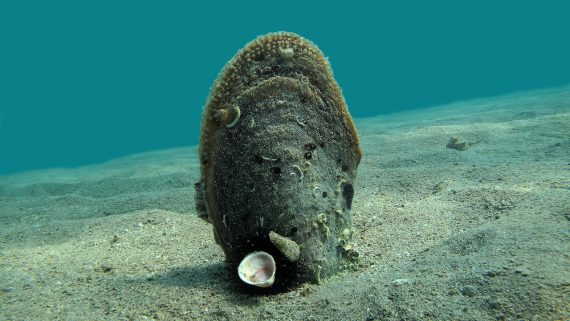 Pinna nobilis, common name the noble pen shell or fan mussel, is a large species of Mediterranean clam, a marine bivalve mollusc in the family Pinnidae, the pen shells. It reaches up to 120 cm (4 ft) of shell length.
This species is endemic to the Mediterranean Sea, where it lives offshore at depths ranging between 0.5 and 60 m (1.6 and 196.9 ft). It could be found buried beneath soft-sediment areas (fine sand, mud, often anoxic). 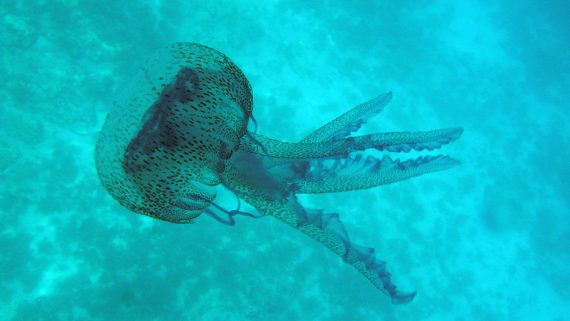 Pelagia noctiluca is a jellyfish in the family Pelagiidae. In Latin, pelagia means "of the sea", nocti stands for night and luca means light; thus, Pelagia noctiluca can be described as a marine organism with the ability to glow in the dark. This species of jellyfish, known in Europe as the mauve stinger amongst many other common names, is widely distributed in all warm and temperate waters of the world's oceans, including the Mediterranean Sea, Red Sea and Atlantic Ocean. It is also found in the Pacific Ocean, with sightings in warm waters off Hawaii, southern California and Mexico, as well as other Pacific locations. This is typically an offshore species, although sometimes it is washed near the coastlines and may be stranded in great numbers on beaches. The color varies worldwide, and in addition to pink or mauve, it is sometimes shades of golden yellow to tan. 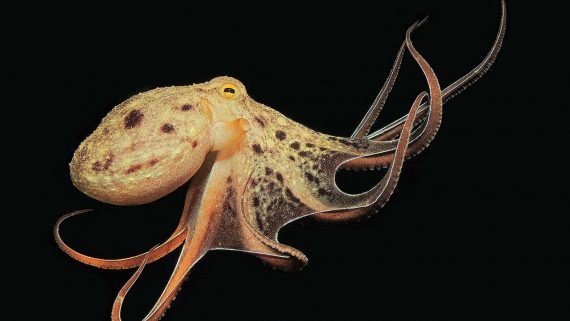 The common octopus (Octopus vulgaris) is a mollusc belonging to the class Cephalopoda, it is the most studied of all octopus species. It grows to 25 cm in mantle length with arms up to 1 m long. The common octopus hunts at dusk - crabs, crayfish, and bivalve mollusks (two-shelled molluscs such as cockles) are preferred, although the octopus will eat almost anything it can catch. It is able to change colour to blend in with its surroundings, and is able to jump upon any unwary prey that strays across its path. The prey is paralyzed by a nerve poison, which the octopus secretes in its saliva, and the octopus is able to grasp its prey using its powerful arms with their two rows of suckers. If the victim is a shelled mollusc, the octopus uses its beak to punch a hole in the shell before sucking out the fleshy contents. Training experiments have shown the common octopus can distinguish the brightness, size, shape, and horizontal or vertical orientation of objects. They are intelligent enough to learn how to unscrew a jar and are known to raid lobster traps. O. vulgaris was the first invertebrate animal protected by the Animals (Scientific Procedures) Act 1986 in the UK; it was included because of its high intelligence. 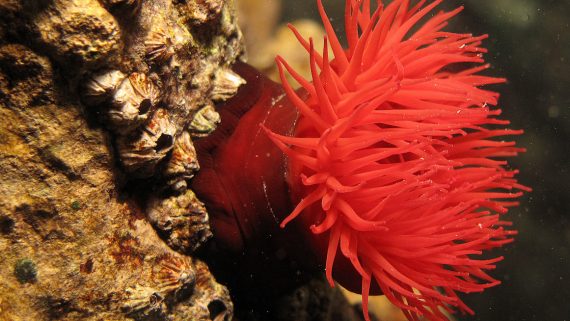 The Beadlet anemone is a common sea anemone found on rocky shores around all coasts of the United Kingdom and Ireland. Its range extends to the rest of Western Europe and the Mediterranean Sea, and along the Atlantic coast of Africa as far south as South Africa. Actinia equina can be found both in exposed and sheltered situations. It is highly adapted to the intertidal zone as it can tolerate both high temperatures and desiccation.
The anemone may also be found in regions of variable salinity such as estuaries. Underwater, it displays up to 192 tentacles, arranged in six circles. Out of water the tentacles retract and the anemone resembles a blob of red, brown, green or orange jelly, up to about 5 centimetres (2.0 in) across. It has bright blue beads (known as acrorhagi) located just beneath the tentacles, organised as an external ring containing stinging cells located at the top of the column that it uses to fight over territory. The acrorhagi contains the cnidocysts which themselves contain the nematocysts. There is some evidence that the various colour forms may in fact be different species. Actinia equina is viviparous, with up to one hundred embryos developing inside the body cavity before being ejected into the open water as juveniles

No products in the cart.